We want to give a huge THANK YOU to all the dedicated CondorWatchers who have helped us reach almost 340,000 classifications!  We also would like to commemorate this time with a little recognition of the condors that we lost over the last year as well as some of the new birds that have come to join the free-flying California population.

A big THANK YOU to wreness (our moderator extraordinaire) for her help compiling these photos and information and of course all she does for CondorWatch!

We had five chicks that fledged from the wild in 2014,  including the unknown “Mystery”, who became famous for showing up for lunch one day at the Ventana Wildlife Society.   (http://www.ventanaws.org/)

And now the sad part — free-flying condors we lost this year from California:

We see them so frequently in the photos – sometimes 6 years in their lives – and they get to be familiar faces.   It is always heartbreaking to see in a condor’s Bio that it has died from lead poisoning but hits harder when you have seen this bird in hundreds of photos.   We sincerely appreciate your to help compiling data that can add a new tool to the arsenal in treating these condors before it’s too late.

So, in Memory for these majestic birds (15 of them total) that we lost from the free-flying California population since CondorWatch launched:

Condor #125 hatched at the San Diego Safari Park in 1995 and was released the following year. He was an 18 year-old breeding male that had been paired with female condor #111 since 2003.   He paired with #111 eleven times over twelve years, making them the longest lasting and most prolific pair of condors in the southern California flock.   Despite many nest failures early on in their relationship, they successfully fledged four chicks.   Three of their four offspring are currently flying in the SoCal population

A true fighter, 401 was treated for lead poisoning at least five times including surviving being shot with lead bird shot.   The last and fatal poisoning event ended his life.   The whole story can be read on our blog here http://blog.condorwatch.org/2014/10/28/the-tragic-fate-of-condor-401/ 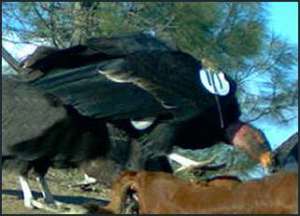 #444 was known as “Ventana”   to the many condor spotters who searched the skies with their binoculars,   She was hatched from an egg laid at the Los Angeles Zoo and was the first to be raised in the wild by condor foster parents. 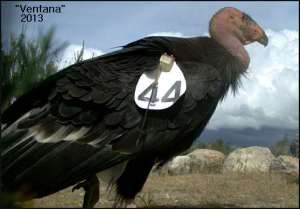 Also lost in the last year: Eight condors aged 3 weeks to almost 3 years of age to factors such as predation, trauma, and a few pending cases.

So, we would like to take a moment to remember these birds but also to thank you for all your efforts gathering data to help California condors become a healthy free-flying population in California and beyond!  We really do appreciate all you do so keep on carrion (as wreness would say)!